Dimitra announces first of many Dimitra Ecosystem Partnerships with DroneX.ai 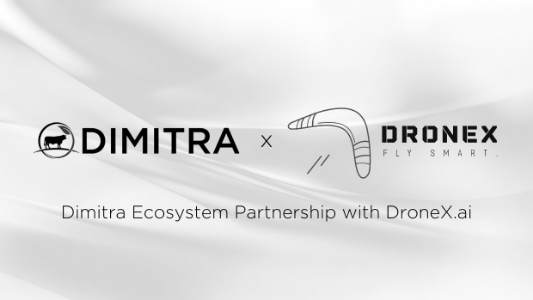 Dimitra and DroneX are working together to create a bundled — Hardware/Software solution for small farmer communities.

Creating new jobs and agtech businesses will enable the Dimitra tokenomics, by using Dimitra Points to book and order a drone service.

The initial projects that Dimitra and DroneX will work on is the development of a spray drone and management platform. The initial target will be South East Asia.

DroneX is dedicated to empowering world’s leading enterprises with actionable intelligence about their physical assets using our smart drone based solutions. We are passionate professionals united by a common purpose: to pioneer the future in Unmanned aerial vehicle technology that’s transforming commercial industries. We are developing the most advanced drones and edge AI system to solve real world problems from asset inspections to disaster response and recovery, and so much more. Dimitra DroneX.ai

Together, we have our feet on the ground and our eyes on the bright future.

The DOHE encourages third party hardware technology companies to develop and deploy their own hardware devices into our eco system. Examples include IoT devices such as animal GPS and soil sensors, edge computing devices, WiFi gate ways and routers, robots, and drones, so that they work seamlessly within our extensive on-farm ag-tech eco system. For example, many equipment manufacturers offer farm equipment that contains built in IoT devices. These devices produce a great deal of rich data that put to good use in optimizing modern farming operations. Other important IoT device categories include motion detectors, intrusion detectors, live stock wearables, and many others.