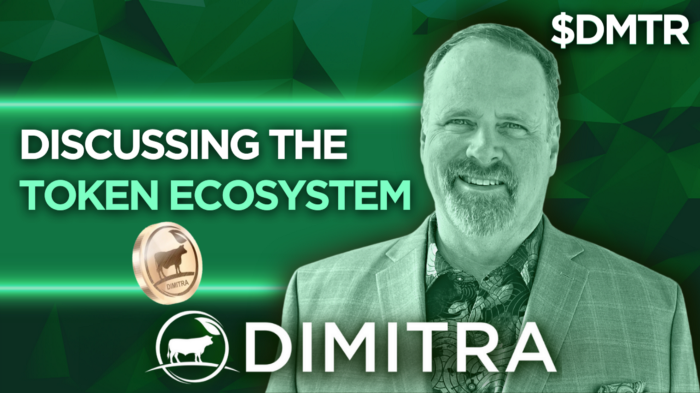 Michael Whitlatch: Can you give me a walk-through of the token ecosystem in terms of utility?

Jon Trask: Yeah, that’s a great question, Michael. So, you know, let’s start with the token. Last September 22nd, in 2021, we launched the token online and our first exchange was KuCoin. It’s an ERC 20 based token, and a utility token. Our token is a standard implementation using basic templates. So it’s come off of open Zeppelin, ERC 20 preset mentor pauser, if you know what that means.

We had our token audited by Certik, and you can actually go to Certik’s website and we can put the link up showing the audit of the token. Our KYC provider within our portal is Sumsub and they provide our automated KYC, AML fraud detection for the Dimitra portal. Sumsub verifies our users on the portal, it usually takes about three to five minutes. Varies a little bit depending on the country that you’re coming from. Otherwise, most people will be buying our token on our exchanges.

Security’s always been one of our highest priorities at Dimitra from the very beginning, and using sum sub and using Certik have been a huge value to us, because they bring a lot of capability and have been great advisors throughout the process. So if we want to skip into Dimitra token utility, think of the Dimitra platform. We start with our Connected Farmer platform, and we also have our Livestock Guru platform, these are the operating systems for Agtech. Our token actually drives utility in our ecosystem. So just keep that in mind as you’re looking at our token, that every kind of transaction we do has some relationship to the token. And as we onboard more and more users, those users will start driving demand in different ways for the token.

Many of the transactions within the platform themselves are done using DMTR tokens, or drive action on DMTR tokens, and I can give you some examples. So right off the bat, we start with staking. People who buy DMTR tokens can stake their tokens within the Dimitra portal, and they earn up to 13% APY. There is some detail around that, but everybody starts at 13% APY. We have a limited number of tokens that are available for staking.

But we’re nowhere near the threshold of those who can earn 13%. We also have the farmers use the Dimitra platform, and farmers earn DMTR points within our farmer points program. So when they perform different activities, they actually drive action on DMTR. So each farmer can transfer their DMTR points into DMTR tokens if they choose. And trade their DMTR tokens for other cryptocurrencies, or they can buy ecosystem services with them.

All of these transactions can be related to the DMTR token, and I’ll give you an example. So if a farmer wants to buy a sensor, they can buy that sensor through us, through their app using their DMTR or using their points.

They can contract a soil specialist to come and do readings on their soil. So if you imagine the farmers told by the platform to plant a seed and they’re gonna plant on a specific day, they may earn some points for planting on the targeted day within the platform. And then, you know, shortly after that, once they’ve reached a certain number of days, they may irrigate, or they may add fertilizer. And all of those steps allow them to earn points within our platform. It’s a great reward for the farmer to load data, and data does create value for us.

You know, another example of utility within our platform. We work a lot with NGOs and governments, farm associations, if they want to buy some of our advanced reports. If they want to buy some of our base reports, they can actually use DMTR to purchase those reports. And I’ll give you an example right now, we have a deal with an individual farming association focused on coffee, and they’ll actually be paying their licensing fees in DMTR. Another example, again, you go back to those NGOs, governments or farm associations. We have advanced reporting. So in our base platform, we offer five satellite reports, and we have advanced reports as well. In order to access those advanced reports, they use DMTR to purchase those reports.

We do create incentives for people to use DMTR to make payments in the ecosystem. So they can convert or use DMTR and get a discount by using that, versus using US dollars. We talked a little bit about sensors and sensors is a great equalizer within our platform. You look at an individual contract, and that individual contract may have some number of users. For example, let’s say that the contract has a thousand users.

Well, those thousand users may have 10,000 cows, and those 10,000 cows need 10,000 sensors. If they want to load sensors within the platform, they have to either onboard through DMTR, the sensors that they’re using, or buy our sensors, with DMTR. And then the other piece is we get a little bit of a multiplier on every one of those, ’cause we put margins on those transactions. And those margins coming back through DMTR allows the value to grow.

You know, lastly, we have an announcement I think that most of you have seen around Ocean Protocol. And we’re working with Ocean to make our data available through the Ocean data marketplace. And that Ocean data marketplace will actually be in the marketplace within the Dimitra app. And the farmers receive a percentage of the proceeds of that sale of data. So if we have a large amount of data on corn in Africa, for example, and somebody needs access to that, be that be commodity traders or brokers, universities, whoever the case may be, in order to get access to that data, they would go into our marketplace, buy the data, and then we share the proceeds of that through DMTR with the individual farmers.

So those are some great examples. We have projects where we provide grants for farmers in order to manage agricultural inputs, insecticides, fertilizers, different seeds, and advice. We also have our sensors and satellites, and all of this can be related to DMTR tokens within the ecosystem. So if you’d like to learn more about the Dimitra token, you can actually go to the website, dimitra.io/token and learn more.